The Dirty Little Secret Of The Female Athlete: Cellulite 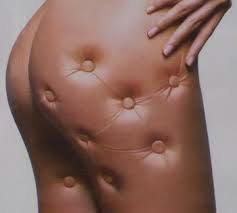 It’s time I got something off my chest. I have a secret. It’s one I’ve been trying to cover it up since I was about thirteen. Until recently I was ashamed of it. In fact, I can’t truly say it doesn’t still make me a little embarrassed.

I always felt that if anyone found out my secret they would think I was not the person they believed me to be. I felt that my secret would lead them to believe I was fat, lazy, unfit, gross, and unattractive, or unlovable. What is this awful secret?

I’ve had cellulite since I was thirteen. I’m not talking about one or two dimples either. I have a sizeable amount of the dimply stuff on the upper part of my posterior thighs. My left side is much worse than my right. I know this because for the last twenty years of my life I have thought about, looked at, evaluated, and schemed about how to get rid of this stuff every single day of my life. Every. Single. Day.

This obsession, along with other body image problems and probably a genetic predisposition, led me to anorexia and bulimia. But guess what? It didn’t work. Even at my thinnest, which was a frail 90lbs, I still had a few dimples on my thighs.

Why was I so obsessed? Why did cellulite drive me to such lengths? Because every “fit” woman I ever saw in a magazine or on TV was completely devoid of the stuff. Every form of marketing and media made it seem as if only fat, unfit women had cellulite. Even the magazine geared toward women who lifted weights told me that if I got lean enough and lifted enough weights I should be able to get rid of the cottage cheese on my legs. Therefore, everyday when I twisted and contorted my body in the mirror, trying to see if my legs were smoother, I was disappointed to see the dimples were still there.

I was still unworthy of the title of “fit.” I was not good enough for a fitness magazine. I wasn’t fit enough to wear shorts or a bathing suit. I was unacceptable.

I know there are countless others who understand these feelings of embarrassment, shame, and frustration. That’s why I’m writing this article; I want us all to understand what cellulite really is and why it is not an indicator of your fitness. I want to rid you of the idea that you shouldn’t even think about wearing a pair of booty shorts to work out in if you are anything less than perfectly smooth. I want to dispel the myth that you need dimple-free legs and a smooth butt to be considered fit.

CYBER WEEK EXTENDED! 65% OFF. USE CODE: CYBERFIT at checkout. Dismiss