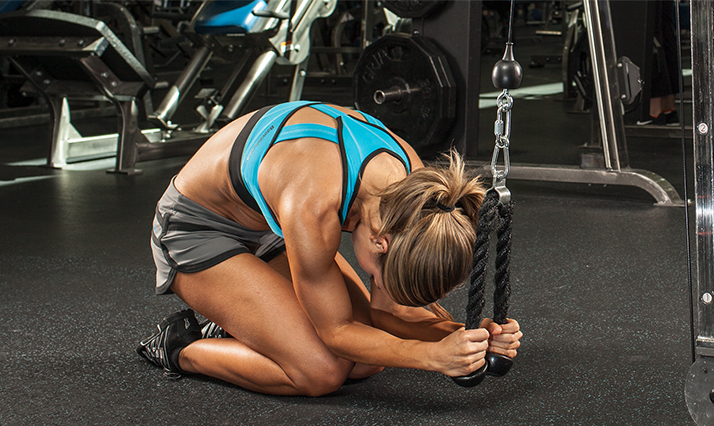 What are the must-do moves for a rock-hard midsection? A few of our choices will surprise you. Do them right, and they’ll let you know why they’re on the list!

Let’s come clean from the start: We’re not here to sell you on the single “best ab exercise ever.” Too many organizations and authors have tried that, and the profusion of “winners” out there can make it confusing—especially because the studies backing them are always limited in one way or another. A few years ago, it was the bicycle crunch. Then it was the traditional crunch. Then it was the pike, the plank, the roll-out… We could go on.

Instead, we’ve put together a full slate of top-level choices in no particular order, along with some explanation about what make each one great and the research backing them up, when available. When building this list, we considered bodyweight and loaded exercises, EMG studies, anti-rotation movements, and much more so that no ab exercise was left behind. That said, it’s time to meet the crème de la crème of the core!

Why it made the list: There are many reasons to like leg raise variations, but one is their scalability. You can start doing bent knee raises in the Roman chair or ab straps to focus on the lower core, work up to straight leg raises, and then move to a hanging bar. By the time you can do full straight-leg toes-to-bar raises, your entire core will have strength for days.

Why it made the list: In our opinion, ab exercises with added resistance don’t get enough love! They spur growth in the fast-twitch fibers like almost nothing else, and they can really build up the “bricks” of your six-pack. By adjusting the load, you can also train to failure at just about any rep target you want. A pin-loaded machine also works well when doing dropsets.

Why it made the list: This increasingly popular movement trains your abs to do what they’re supposed to do: stabilize your skeleton. Pallof presses serve as an anti-rotation movement, meaning the body is actively fighting rotation throughout the motion. By utilizing exercises like this, you can increase core stability in various planes of movement and reduce likelihood of injury.

There are many ways you can do this move, even including a Pallof press with rotation, but most start at a cable stack with a D-handle just below shoulder height. Grab the handle in two hands, take 4-5 steps away from the pulley, and turn so that your side is facing the plate stack. Without rotating at the hips, press the D-handle straight out, and return back to center; all the while, you’ll fight against turning toward the pulley. Be sure to maintain a neutral spine and keep your shoulders down during the entire pressing motion.

Why it made the list: The primary strengths of this crunch variation are its versatility—you can do it on any cable stack—and the way it allows you to use any level of resistance to train for a target rep range. Still, lots of people perform them wrong.

First off, it’s easy to sit back while doing this move, letting your hip flexors do much of the work. Second, if you keep a flat back, it limits the degree to which you can hit the upper abdominals—your back has to round! And finally, your hands should stay in the same relative position next to your head for the duration of the set. Letting them drift away on the eccentric and then pulling them back again beside your head brings a lot of shoulder and upper body into the move.

Why it made the list: Decline-bench crunches amp up the challenge by increasing the range of motion over standard crunches, and you can dial up (or down) the degree of difficulty by adjusting the angle of the bench. Adding a medicine ball or weight plate against your chest adds a further level of customizable resistance. This also allows you to manipulate where you want to fail: low, medium, or high reps.

But you can still go wrong. Because your feet are hooked, it’s all too easy to pull through your thighs. Nor do you want to go all the way down to rest on the bench between reps; stay well off it. If you’re not feeling a wicked burn, drop all the weight, put your hands on your belly, and really focus on the contraction at a slower pace. You can also introduce a cross-body movement, angling your elbow to the opposite-side thigh, to better engage the obliques.

Why it made the list: Yes, a leg exercise made the top 10 list for abs. Anyone who has ever pushed their potential in the squat knows exactly why! Sure, squat variations work the legs and lower back, but they also crush the abs. Both front and back squats force your abs and spinal erectors to work overtime to maintain a neutral, upright position. If both were not firing at high rates, you’d fold under the weight or drop in a split second.

Oh, and forget what you heard about standing on a BOSU ball to increase the work of your stabilizers. Research has shown that if you just go heavy with your squats on the floor, you’ll get all the ab stimulus you want.1

Why it made the list: This harder version of the Russian twist works the obliques while requiring the upper abs to contract isometrically. To recruit the obliques, you either need lateral flexion (bending to your side), trunk rotation (twisting), or sucking in your belly. Doing your twists works the trunk-rotation function of the muscle, so really focus on the contraction. Try to get a little crunch on either side after the rotation to up the ante.

Your biggest danger here is letting your arms wave across your body and out of line with your torso. Turn at the waist, not your shoulders. In addition, avoid pulling through your thighs (hip flexors) on the decline bench here as well.

Why it made the list: Those infomercials got one thing right! Some EMG data suggests that using an ab wheel may beat out hanging leg raises, sit-ups, and reverse crunches for the top muscle activator. This movement capitalizes on the concept of anti-extension perfectly; as you roll out, your trunk must actively fire (eccentric motion) to maintain a neutral spine without collapsing under your body weight and gravity. 2 Watch that you don’t risk your back by allowing it to droop into extension at the bottom, though!

Why it made the list: It turns out the ball is good for more than just sitting and waiting for your partner to finish his set! A research team from California State, Sacramento demonstrated that the pike movement is one of the most effective total-ab workouts.3 It topped their EMG list for upper abs, lower abs, and obliques. This movement may be the heavy hitter that’s been missing from your daily routine. While not exactly the same, the pike can also be done using a TRX system with similar results expected.

Why it made the list: The plank is an isometric hold that really focuses on the core. According to the EMG sources we checked, this movement is a mid-tier activator of both the rectus abdominis and obliques.3 It’s also a great transverse abdominis move, but that muscle is deep, so can’t be measured by EMG.

We put this on the list because of how easy it is to manipulate the degree of difficulty. If a regular plank is too easy for you, lift an arm, or a leg—or an arm and a leg. Put your feet into a TRX and give that a whirl. Still too easy? Take your feet out, and put your forearms in. Each one of these progressions leads to a greater training stimulus to the abs.

CYBER WEEK EXTENDED! 65% OFF. USE CODE: CYBERFIT at checkout. Dismiss